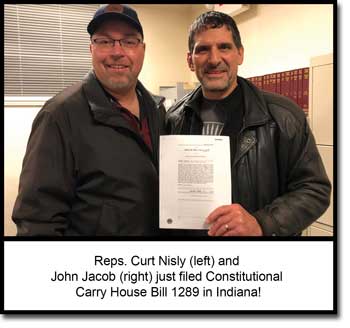 Representative Jacob is joined by co-authors Rep. Curt Nisly, Rep. Zach Payne, and Rep. Chris Jeter. This is our best opportunity yet to make Indiana a Constitutional Carry state, but we need as many pro-gun patriots ready for this fight as possible. So please sign your Constitutional Carry petition right away, letting your lawmakers know you support this important legislation. This is wonderful news for law-abiding gun owners in Indiana. House Bill 1289 (or HB 1289) simply states that if you can legally possess a handgun, you can carry it to protect yourself and your loved ones without having to beg for government permission. In other words, as a law-abiding citizen, you shouldn’t need any “permission slip” from the government to keep and bear arms, other than the Second Amendment. That’s why I need your immediate help to let lawmakers know gun owners want nothing less than true Constitutional Carry. We will have to fight hard to make Indiana the next Constitutional Carry state. You see, the political class in Indianapolis is going to throw every possible roadblock in the path of Constitutional Carry. Last year, they refused to even hold a committee hearing on Constitutional Carry! And the political class in Indianapolis keeps playing games with your rights. While they continue to kill Constitutional Carry and require citizens to ask the government for permission, they expect praise for passing minor gun rights legislation. You see, they expect you to look the other way, or just put the blinders on as they use your rights as a bargaining chip. We’ve seen it year after year. Politicians and candidates claim to be pro-gun to earn support in elections, just to turn around and support gun control when in office. It is time to hold the political class accountable and push for a recorded vote on Constitutional Carry this legislative session! That’s why I’m counting on you to show your support for this pro-gun legislation by signing your Constitutional Carry petition today! Exposing the anti-gun actions of self-proclaimed pro-gun representatives is the best way to hold politicians accountable for turning their backs on gun owners. Gun owners won’t sit idly by and tolerate representatives paying lip service to the Second Amendment, who then turn around and support gun control. That’s why your continued grassroots activism is so important. Politicians MUST understand that Hoosiers will settle for nothing less than a full restoration of gun rights and will not accept incremental reforms. In total, 16 states recognize the right to carry without government permission, including liberal Northeastern states like Vermont, Maine, and New Hampshire. With Republican supermajorities in both chambers, there’s no excuse for Indiana not to recognize Constitutional Carry. But this will not happen without your activism. That’s why I’m counting on you to sign your Constitutional Carry petition immediately! Your signed petition will let lawmakers know that you expect nothing less than the full restoration of your rights. Once you’ve signed your petition, can I count on you to forward this to at least one friend or family member to do the same? We need as many pro-gun patriots in this fight as possible. But mobilizing the activists needed to pass Constitutional Carry can be a costly task. Thank you in advance for your activism. For Freedom,

Constitutional Carry is in dire straits in Indiana unless you act immediately.You see, my sources indicate that Senate President Pro Temp. Rodric Bray and Sen. Liz Brown are conspiring to kill Constitutional Carry bill HB 1077 that passed out of the Indiana House just...

Is She Going To Kill It Again?I just got back from a meeting with Senate Judiciary Chair Liz Brown and I wish I had good news.Instead, Brown made it clear she would rather stand with the likes of Joe Biden and Michael Bloomberg than pass Constitutional Carry bill HB...

Here we go again!We are hearing from insiders at the Capitol that Rep. Matt Lehman is telling people within his district Constitutional Carry is NOT on the legislative agenda for the 2022 Legislative Session.It is no surprise that anti-gun members of the Republican...

It didn’t have to be this way…

This is just embarrassing…