Did you watch the Indiana Gubernatorial debate? If you did, you witnessed Governor Holcomb openly telling viewers that “We want to make sure we protect our Red Flag laws.” 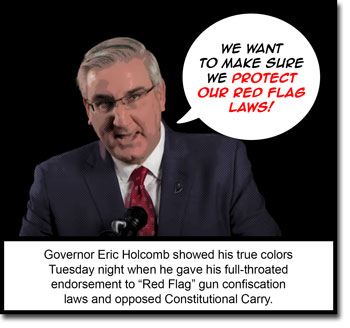 The Republican Governor of Indiana just championed the Gun Control Lobby’s top legislative priority. As you know, “Red Flag” laws allow government agents to confiscate legally-owned firearms from otherwise law-abiding citizens and deny them the right to keep and bear arms, with very little evidence and no crime ever having been committed. Governor Holcomb also refused to support, and even indicated his opposition to, Constitutional Carry during the debate. This is a shocking revelation coming just days before the general election from a supposedly “pro-gun” Republican Governor. Interestingly enough, the Libertarian candidate openly embraced Constitutional Carry and pledged to fight to make it law in Indiana. Constitutional Carry simply means that if you can legally possess a gun, you can carry it to protect yourself without having to beg for government permission. With Constitutional Carry, if you are legally able to possess a handgun, you are legally able to carry it, openly or concealed. Fifteen other states already have Constitutional Carry laws on the books, including neighboring Kentucky! In recent weeks, the campaign for Governor went from a snooze fest to a barn burner after a recent research poll showed incumbent Republican Governor Holcomb’s statewide support has plummeted from over 60% in April to just barely holding a plurality of support at 36% in mid-September. Much of his cratering support is due in no small part to his heavy-handed response to the COVID-19 outbreak, as conservatives are seeking other candidates who will actually stand up for their constitutional rights. As if 2020 couldn’t get any weirder, the largest beneficiary of Holcomb’s struggling poll numbers is Donald Rainwater, the Libertarian candidate for Governor who is coming in at a strong third place in that mid-September poll at 24%. Governor Holcomb and his campaign team are frantically trying to figure out how they can cobble together a winning coalition now that Rainwater is eating away at his base of support. This gives gun owners a perfect opportunity to put heat on Holcomb to come out boldly in support of making Indiana a Constitutional Carry state. When politicians feel the heat, they see the light. In other words, when politicians realize that an issue could cost them their re-election, they often change their views to save their careers. Now is the time to lobby Governor Holcomb and you can help out by calling the Governor’s office at 317-232-4567 and insist he denounce “Red Flag” Gun Confiscation and fully support Constitutional Carry. This is especially important with Democrat candidate for Governor Woody Myers nipping at Holcomb’s heels and garnering support from the Gun Control Lobby. During the debate, Woody Myers touted his designation as a “Gun Sense” Candidate from Bloomberg’s Gun Control Lobby and summed up his stance on the Second Amendment with three words, “Guns kill people.” When Republicans rush to the left during election cycles, the results often aren’t pretty. That’s why gun owners must push Governor Holcomb to stand strong for the Second Amendment, and he can do that by announcing his support for Constitutional Carry. With your help, we can flood Governor Holcomb’s office with calls, showing the strong grassroots support of Hoosiers for Constitutional Carry. You see, when politicians are vulnerable they are more susceptible to pressure and that works to our advantage! With his poll numbers cratering and his campaign hemorrhaging support, Holcomb is in full panic mode, trying to figure out how he can rebuild his support with the grassroots. That’s where gun owners can jump in and make Constitutional Carry a central issue in the closing days of the campaign. Your Hoosier Gun Rights is dedicated to keeping you informed about the true positions of your elected officials and that’s exactly why I sent you this message on such short notice. With members and supporters across Indiana, we are giving people across the Hoosier State a loud voice in defense of our gun rights. And trust me, the politicians can hear you. If we are successful in forcing Governor Holcomb to reverse course and come out publicly in support of Constitutional Carry, it will go a long way towards setting the stage for its passage in 2021. We’ve seen it time and again. A Governor can either be a major obstacle or a helpful catalyst to the passage of Constitutional Carry. I wasn’t expecting to have such a great opportunity to put so much pressure on Governor Holcomb, but with the Governor’s race as tight as it is, now is the time for gun owners to turn up the heat! Thank you for your support. For Freedom,

Constitutional Carry is in dire straits in Indiana unless you act immediately.You see, my sources indicate that Senate President Pro Temp. Rodric Bray and Sen. Liz Brown are conspiring to kill Constitutional Carry bill HB 1077 that passed out of the Indiana House just...

Is She Going To Kill It Again?I just got back from a meeting with Senate Judiciary Chair Liz Brown and I wish I had good news.Instead, Brown made it clear she would rather stand with the likes of Joe Biden and Michael Bloomberg than pass Constitutional Carry bill HB...

Here we go again!We are hearing from insiders at the Capitol that Rep. Matt Lehman is telling people within his district Constitutional Carry is NOT on the legislative agenda for the 2022 Legislative Session.It is no surprise that anti-gun members of the Republican...

It didn’t have to be this way…

This is just embarrassing…